Thanks to a successful renovation, the port of Étaples is now positioned as a tourist focal point orientated towards the sea.

Due to the increasing size of boats and silting up of the baie de Canche, which reduced access to the port, the boats from Étaples migrated to the port of Boulogne-sur-Mer to which access is not dependent on tides, thus making it possible to land fish at a fixed time at the end of the night.

However the fishing town has made every effort to preserve the tradition of fishing on its quays.

From the port of Boulogne to Étaples the fish, once landed, go through a series of different stages (sorting, checking…) in record time. Less than a half-day elapses between unloading and delivery of the product to Étaples at the fishmonger’s or the fish vendor on his stall, thus retaining the principal quality of fish: its freshness!

To buy your fish on the quay, direct from the fisherman 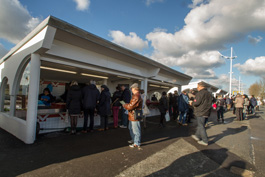 The port of Étaples’ fish market is an unmissable venue. In the twelve modern stalls, adapted to European hygiene standards and refurbished while respecting their original form, you will find seasonal fish all year round, locally caught by the Étaples fleet and of unrivalled freshness. With real know-how, market vendors will advise you on the choice and cooking of the fish that they prepare for you (gut, scale, fillet…).

The sale of fish on the fishermen’s stalls normally takes place every day in the morning if the boats have been able to go out to sea.

This traditional rowing boat race, time-honoured and beloved by the locals, takes place on a Sunday near to 29 September (Saint Michael’s day).

On the Canche, nearly 100 rowing boats (of under 4 m 20) take the start. They dispute a race over a course of about two kilometres. A second round, called “sculling race” is also scheduled. The rowing boats, manoeuvred by one man, have to cover a distance of 5 to 600 meters.

At the origin of this tradition, the lougres, fishing boats with sails, beached facing the northern base of Le Touquet at low tidal ranges. The crews would load the catch onto the clinker-built rescue boat and they got back to the port by rowing. During the trip, the crews challenged one another: to be first at the Étaples quay!