From the Gallo-Roman port of Stapula to the heyday of the Étaples School of painters but also the confrontations, rivalries, crises… the rich history of Étaples-sur-mer merits our interest!

On the site occupied by the town of Étaples-sur-mer today, human presence is attested from prehistoric times. The tools found at the Bagarre site (c. 240,000 BC) allow us to imagine the life of those nomadic Neanderthal and Cro-Magnon hunters who followed and trapped animals such as reindeer, bison and mammoths. Experts in flint knapping, they also knew how to make use of fire; sew leather; work bone and wood. 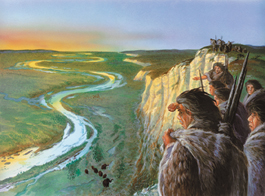 In the Neolithic period men settled in villages (structures were found on the Sablins site, c. 3,700 BC). They exploited resources from the sea, the level of which had risen due to the melting of ice sheets, and lived on agriculture and livestock.

The discovery of metallurgy, c. 200 BC, brought a significant change in lifestyle: bronze tools; then iron, which are stronger, were produced at will thanks to moulds for their manufacture. In the same period, the exploitation of sea salt, an important exchange commodity, brought them a not insignificant source of revenue. From Hallstatt onwards, numerous Iron Age sites provide evidence for the settlement of Gauls on the coast and in the dunes bordering the north-west of the town of Étaples-sur-mer.

After the conquest of Gaul by Julius Caesar in 57 BC, the influence of Roman civilisation could be seen at Stapula, which is the ancient name of Étaples-sur-mer, in a more developed urbanisation (roads, buildings with stone foundations); several settlements (vici) appeared on the present site of the town. Trade flourished during the Pax Romana: excavations have uncovered black decorated vases, beautiful red Samian pottery, fibulae that were used to secure clothing, glass and amber jewellery as well as bone pins.

That golden age of the ancient port, located at the mouth of the Canche, was followed by a period of turmoil and the gradual disappearance of the structures of Empire. The port was the victim of invasion by Danish Vikings attracted by the richness of the nearby port of Quentovic (9th century).

In the 10th and 11th centuries, Étaples-sur-mer was under Flemish domination. The merchant port was to benefit from that prosperity. In 1172, Matthew of Alsace, Count of Boulogne built a fortress there. Following the marriage, on 28 April 1180, of Philip Augustus and Isabella of Hainault, the latter having received the regions of Artois and Boulonnais (Staple included) as dowry, those provinces returned to France.

In the Middle Ages, the port of Étaples-sur-mer was a maritime stopover for coastal navigation. The port provided shelter, in case of heavy weather, for vessels to put their cargo, as well as passengers and crews into safety: travellers to Artois or to England, pilgrims passing through. Fishing for fresh fish, with small boats, was already a recorded activity.

Signed on 3 November 1492, the Treaty of Étaples-sur-mer between Charles VIII and Henry VII of England was the first treaty between France and England since the end of the war.

In 1450, the philosopher, mathematician and theologian Jacques Lefèvre was born in Étaples-sur-mer. Notably, he became famous for his translation of the Bible. 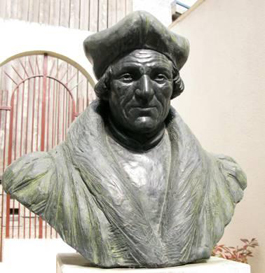 During the diplomatic meeting near Calais between Francis I and Henry VIII of England (Field of the Cloth Gold), the French king stayed at the château d’Étaples-sur-mer on 27 June 1520. Louis XIV was received 26 May 1637. The château was demolished in 1641.

The French Revolution had no fatal consequences for the town administered by its revolutionary council and popular society.

From 1803-1805, Napoleon Bonaparte toyed with the project of invading England. In his plan, the attack had to start from the Boulogne camp to land at Dover. The fleet consisted of seven squadrons; two of them were stationed in Étaples-sur-mer, four in Boulogne, one in Wimereux. Napoleon considered that the ships would be protected from any enemy attack in these ports of refuge, accessible by following a navigation channel. Thus, from early 1804 October 1805, Étaples-sur-mer was able to accommodate up to 350 ships (war and transport combined). The project was abandoned and the flotillas left the ports.

The town developed rapidly from the late 19th century. It benefited from the construction of numerous facilities. The first train station was initially built in 1847 for the opening of the Amiens-Boulogne line in 1848; in 1875, it was replaced by a second station common to the two lines (a second line then connected Étaples-sur-mer to Arras). Various projects were undertaken in the port of Étaples-sur-mer: a timber wharf was built in 1847; it was extended by a 100 metre masonry quay in 1880-1882, then a further 100 metres in 1896-1897. Two lighthouses were erected in 1852 to signal the entrance of the harbour; work was undertaken to straighten up the channel and to limit silting. A bridge over the Canche was constructed in 1860. The fish market opened in 1874. The population of Étaples-sur-mer reached 1,691 inhabitants in 1831, 3,342 in 1886, 5,823 in 1911. In the early 20th century, nearly a hundred fishing boats berthed at Étaples-sur-mer. 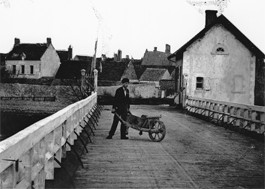 At the end of the 19th century, more than two hundred artists of all nationalities (English, Australian, German, Scots, American…) discovered the town of Étaples-sur-mer and nearby villages and decided to settle there, for a shorter or longer period. The “Étaples colony” reached its peak between 1880 and 1914. The landscape, light and picturesqueness of the Côte d’Opale delighted the artists. That artistic movement was to be interrupted by the First World War. Eugène Chigot, leading the way, put on an exhibition on 7 August 1892. The “Society of Friends of the Arts” brought together 45 artists, 83 paintings, 12 drawings and 7 sculptures. That exhibition was held in Étaples-sur-mer until 1900, then until 1914 in Le Touquet. 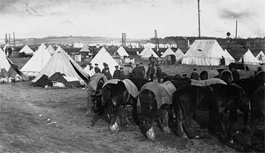 Étaples-sur-mer welcomed a British camp during the First World War. Due to its strategic position, the town was the centre of a logistic area of primary importance for the British forces that trained their soldiers there and cared for them when they returned from the front. Very quickly, with the first deaths, it was necessary to build a cemetery. The first funeral took place on 13 May 1915. The cemetery was later extended up to attain six hectares: it is the largest Commonwealth War Cemetery in France. 10,729 graves of soldiers of the British Empire overlooking the Canche as well as 658 graves of German soldiers, those of four nurses killed during the air raids in 1918 and the tomb of a Chinese worker. All the forces of the British Empire engaged in the conflict are represented: English, Scots, Canadian, South African, Australian, New Zealand, Indian… The town of Étaples-sur-mer received the Military Cross.

The interwar period saw the construction of the Saint-Frères factory in 1920 and the second bridge over the Canche to replace the first built in 1860. During World War II, Étaples-sur-mer experienced the German occupation. It was again the target of bombing, this time by British aircraft in order to destroy strategic points and infrastructure. The numerous bombing raids wiped out entire neighbourhoods as well as the bridges over the Canche and even Saint Michael’s church built in the 13th century. Before leaving the town, the Germans completed the destruction by blowing up the quay and sinking fishing boats in the Canche to build a dam. After the Liberation, the church, bridges and quay were rebuilt. The town of Étaples-sur-mer once again received the Military Cross. 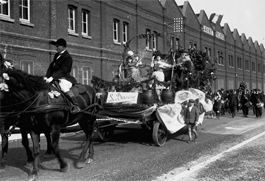 The number of fishing boats docked at the port of Étaples-sur-mer decreased gradually after the First World War; the movement accelerated after the second conflict. The fish market was abandoned, the fishermen gradually departing to dock at the port of Boulogne.

Walk “on the path of First World War” |>